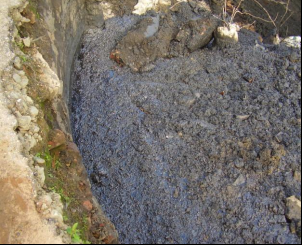 The site occupies an area of 0.4 hectares and borders the River Irk. The site was contaminated due to its historical use as a former gasworks and as such was contaminated with pollutants including Total Petroleum Hydrocarbons (TPH), Polycyclic Aromatic Hydrocarbons, phenol and ammonium.

The overall remediation strategy was designed to address the contamination source and indirectly the pathway issues, with the intention of protecting both human health and groundwater receptors. The objective was to chemically stabilise the ‘contaminated’ soils using a combination of cementitious products and proprietary E-Clay. The Envirotreat process was selected based on a number of criteria, most importantly the ability of Envirotreat to apply its E-Clay capability using an insitu approach. Logistical constraints prohibited the more conventional ex-situ approach being utilised in all areas across the site, however certain wastes were treated ex-situ.

The remediation strategy for the Middleton site comprised a two stage approach. The first phase of the project involved the in-situ treatment of an area between the tar tank and one of the gasholders. The area identified was thought to have been impacted by tar leaking from an old storage tank. This stage involved the installation of approximately 200 overlapping soil-mixed columns, drilled to a depth of 8 metres (below ground level) in the contaminated area outside of the tar liquor tank. The second phase involved more conventional ex-situ treatment of contaminated materials taken from inside the tank.

Envirotreat employed an in-situ soil mixing strategy to remediate over a 1000m³ of contaminated soils at the site.

The works were conducted over a period of 6 weeks under Envirotreat’s Mobile Treatment Licence (MTL). Specialist technology, materials, supervision plus all the required plant and labour were supplied by Envirotreat Limited.