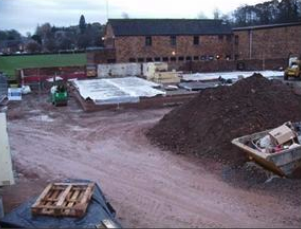 The site was previously an operational gas works owned by British Gas Properties, manufacturing town gas between approximately 1859 and the mid 1970. The site is located adjacent to the River Eden.

During the late 1990’s remedial works took place on site which are believed to have involved the excavation and removal of significant volumes of contaminated material, however, this methodology resulted in residual contamination remaining at depth on site.

In order to protect the identified surface and groundwater receptors, i.e. the River Eden and address the contamination pathway issues Envirotreat installed an E-Clay Permeable Reactive Barrier along the line of the River.

A groundwater modelling program (MODFLOW) was utilised in order to confirm there would be  minimal effect on the natural groundwater regime whilst effectively intercepting and treating the contaminated groundwater.

Envirotreat developed a site specific design and formulation for the E-Clay PRB based on the maximum identified contaminant loading.

The E-Clay PRB installation  on site was carried out using a Continuous Flight Auger (CFA) by the production of overlapping soil mixed columns.

Post installation groundwater and river monitoring confirmed the efficacy of the remedial solution.