The site is located on the former site of Minoco Wharf on the north bank of the River Thames. West of Thames Barrier Park, and close to both West Silvertown and Pontoon Dock DLR stations.

The development, was a joint venture between Ballymore Group and Singapore listed Oxley Holdings, includes 3,385 residential units and 10,000 square metres of retail and commercial space.

Cognition Land and Water were commissioned the undertake the demolition and overarching remediation for the site.

The 15.2 hectare site was originally developed as an industrial works at the end of the nineteenth century and was also used for the manufacture of TNT during the First World War. Following this, the site was used by Shell UK for a period as an oil storage and refining site. On 19 January 1917 a large explosion at a munitions factory on which killed 73 people and injured more than 400, and caused substantial damage to the local area.

Silvertown War Memorial in its new location in the middle of the Royal Wharf development, 2016.

CGL conducted a data review of previous investigations at the site and subsequently scoped and supervised an extensive series of intrusive investigations including 31 cable percussive boreholes, 157 window sampler boreholes and 30 trial pits. Their investigations identified contamination in the soil and groundwater that posed a risk to human health and controlled waters, including heavy metals, hydrocarbons, asbestos and dye waste from past industrial works on the site and the surrounding area.

Part of the overall remediation strategy proposed by GGL was the installation of a reactive clay barrier wall to prevent off-site migration of shallow groundwater contamination.

Envirotreat were commissioned by Cognition Land and Water to design and install the PRB to address the contaminants of concern highlighted by CGL.

The barrier system was designed to incorporate a site-specific formulation of pillared E-Clays – the pillaring effect provided the necessary porosity / permeability for the PRB System (in addition to a treatment capability for metallic species in anionic form i.e. arsenates / arsenites) – the majority of the metallic contaminants of concern are cation exchanged onto the clay matrix.

The barrier installation involved the excavation of a trench extending into the underlying (relatively impermeable) clay – the pillared E-Clay treatment medium was then added. 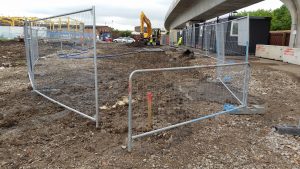 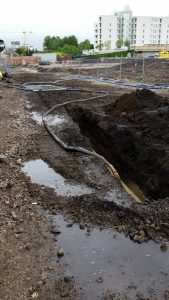 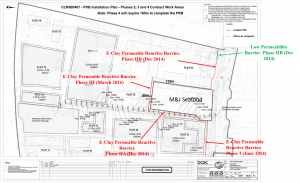