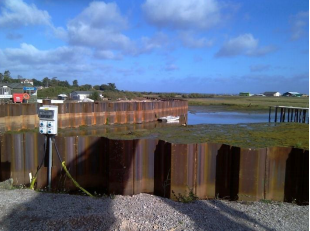 The site is located at Yarmouth on the Isle of Wight and is currently used as a boatyard. The site borders onto the River Yar Estuary and occupies 0.64 hectares. The high tide line bounds the site to the north and east. The Freshwater Gas Company was established on the site in 1899. The Gas Works was expanded in the 1940’s with the addition of two further gas holders. It is believed that the gasworks closed in the 1960’s.

The site owner is proposing to redevelop and refurbish part of the current site to improve existing facilities. The redevelopment will comprise of new hard surfaced areas, the addition of four boat sheds and a new reception building. The former dilapidated quay wall has been replaced with sheet steel piling.

The prime source of contamination was in the south western corner of the site (associated with a former gas holder). The identified contamination was not considered to pose a future risk to human health as the development plans for the site incorporate the provision of significant hardstanding, thereby providing an effective ‘pathway break’ to protect human receptors.

The primary environmental concern was identified as the potential risk to the estuary and surrounding environmentally sensitive areas (receptors). These receptors were considered to be at risk due to the presence of contaminated groundwater on the site. Card had identified the presence of elevated levels of Arsenic, Boron, Cadmium, Chromium, Copper, Lead, Mercury, Nickel, Zinc, Cyanide, Phenols, Benzo(a)Pyrene, TPH and Sulphate within the groundwater, potentially migrating offsite and impacting the sensitive receptors.

Post installation groundwater monitoring was undertaken by Card Geotechnic.
The barrier system was installed in accordance with the design requirements and the remediation strategy.
Envirotreat produced a comprehensive Validation Report to confirm the satisfactory installation of the barrier system.
The prime drivers for the remediation works were the protection of controlled waters and other sensitive receptors.