Working with Mason Evans in Scotland, Envirotreat were able to design and implement an economically viable integrated remediation strategy for a former gas works in St Andrews. Off-site disposal costs were considered prohibitory, even though the site was relatively small in area, in itself no more than 25m by 25m. The site encompassed approximately two thirds of the former gas holder and considerable residual contamination elsewhere on site. The site was situated right next to a sensitive burn which feeds into the sea, on this basis impact of controlled waters was considered crucial to the success of the remediation strategy. The Envirotreat remediation strategy consisted of E-Clay stabilisation of the grossly impacted soils within the gas holder, together with the provision of a low permeability barrier to minimise recontamination of the treated soils from the remaining third of the gas holder under the neighbouring site. An E-Clay reactive barrier was designed and installed along the site adjoining the burn to further protect the burn from resident contamination.

Picture showing line of former gas tank and the contaminated ground inside. 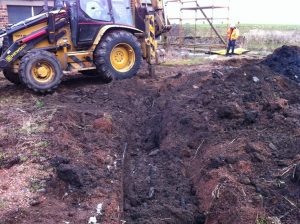