Commissioned by Trebor Developments to design and implement a remediation strategy

Envirotreat Technologies Ltd was commissioned by Trebor Developments to design and implement a remediation strategy to address a number of planning constraints resulting from the proposal to develop a former chemical works in Coventry for a commercial end use. Previous site investigative work to date had shown minimal contamination which was not considered to pose a risk to human health and / or controlled waters. The site investigative work highlighted a number of areas of known contamination requiring further investigation and the potential for further unexpected contamination within the site boundary. On this basis the planning authority placed a number of planning constraints on the development which if invoked would cause considerable delay in the project delivery – for instance the discovery of unexpected contamination required the developer to commission further investigative works and risk assessment prior to continuation. Envirotreat obtained agreement from the planning authority through the implementation of a number of protocols which effectively mitigated these potential delays. Envirotreat additionally provided environmental monitoring during the initial requisite excavation works, including reassurance air monitoring.

The photograph shows the presence of amosite asbestos which was disposed of offsite. 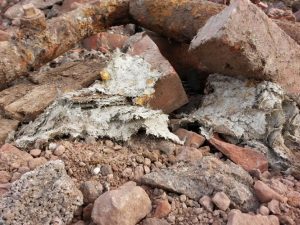