Envirotreat Technologies Limited was engaged by Bouygues UK Limited to carry out an intensive watching brief and materials management for a new apartment block development within the heart of Media City, Salford. The site had seen varied historic industrial activity going back to the mid-1850’s including a container port, Docklands, railway land/sidings and a food processing plant. Site investigations had identified TPH, PAH and asbestos contamination across the development area. The concentrations were assessed against current WM3 requirements and confirmed three hazardous “hot spot” areas. The enabling works (reduced level dig, piling arisings and pile cap excavations) resulted in a surplus of some 9000 Tonnes of soil for disposal. Using current WM3 regulations, Envirotreat successfully managed the off-site disposal, with the hazardous soils transported to Envirotreat’s Treatment Hub for treatment and recycling/reuse and the majority (some 7500 Tonnes) sent for non-hazardous disposal. The excavations revealed the presence of a concrete interceptor pit within the building footprint, which contained around 7500 litres of oily water which required immediate removal and disposal to avoid costly delays on the project program. Envirotreat, as part of the watching brief, utilised one of our industry partners to remove the oily water for subsequent disposal.

The photo below shows the commencement of the reduced level dig 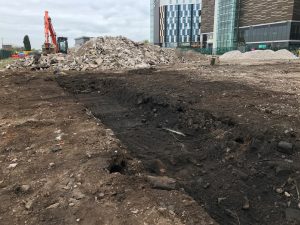