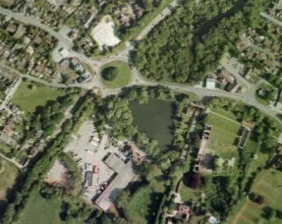 The site was located in Bishop’s Waltham in Hampshire.
Significant hydrocarbon contamination was identified on  site consistent with its previous industrial usage as a haulage and transport centre which included mechanic’s garages and various industrial units.
Detailed speciation of the hydrocarbons indicated the presence of a mixture of weathered petrol and diesel species. Several underground fuel storage tanks were known to have been present which are assumed to be the prime contamination sources.
Several receptors were identified comprising of major and minor aquifers, a river and site workers / end users.

The proposed remediation strategy involved the ex-situ bioremediation of hydrocarbon impacted soils using controlled biopiles. The biopiles were constructed to provide optimum performance incorporating
specific soil conditioners. The designated amendments were based on treatability trials and evaluation of the analytical data presented within the site investigation report.
Key parameters were monitored throughout the remediation programme and the operating conditions were amended accordingly.
The remediation strategy also required the removal and off-site disposal of free-phase hydrocarbon contamination. Skimmer pumps were employed to remove water and free-phase contamination from an excavated trench