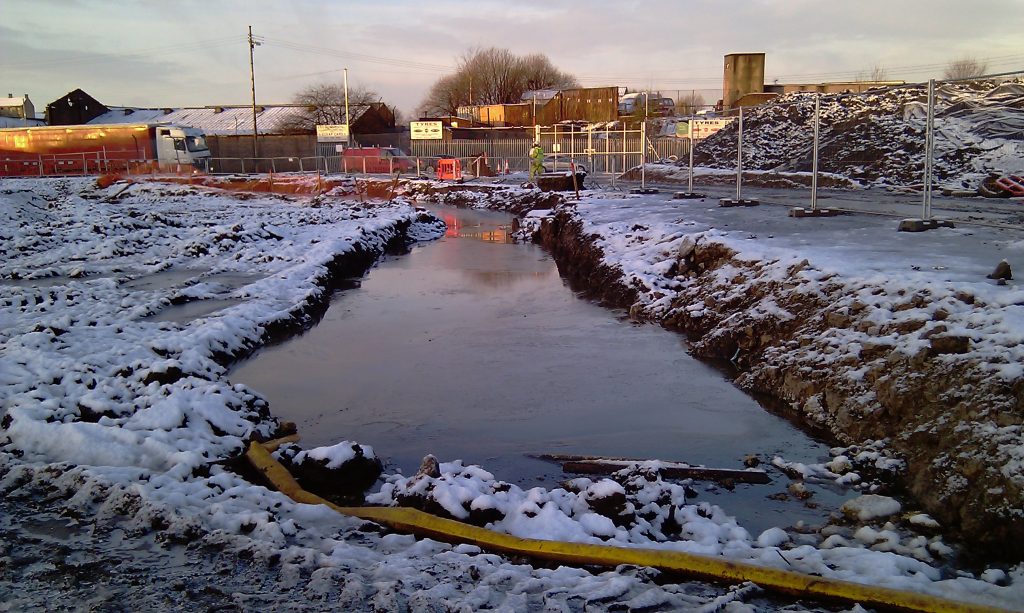 The site of concern was previously occupied by the former Parkhead Forge Rolling Mills and Steelworks (in the West) and Carntyne Dyewood Mills on the eastern area of the site. The local area had a history of heavy industrialisation.

The Camlachie Burn flows across the site. Shallow groundwater was present within the made ground, the groundwater was locally discontinuous and perched in places. Monitoring data highlighted the potential for localised flows towards the north west of the site (in the north) and towards the west (in the southern area of the site).

Soils and groundwaters within the western area of the site had been shown to be impacted by hydrocarbon contamination (including free product). The soils were considered to represent a significant risk to the water environment beneath the site. It was estimated that the affected soils covered an approximate area of 2,850m².

Contaminated soils were recorded to be encountered at depths of between 0.6m and 1.7m bgl, extending to between 1.1m and 2.2m bgl and exhibiting an overall average thickness of 0.6m. Shallow groundwater was recorded at an average depth in the region of 1.3m bgl in this area, with thin layers of free-phase product recorded on the groundwater surface at various locations.

The following remediation measures were considered by Halcrow (consulting engineer):

Having assessed the potential options it was concluded that the on-site treatment and re-use onsite was the most practical, cost-effective and environmentally sustainable solution.

REMEDIATION OF HYDROCARBON CONTAMINTED SOIL & GROUNDWATER
Rigby Street, Glasgow
“Envirotreat acted as a specialist contractor to our main contractor in this challenging site redevelopment project in Glasgow. It involved the excavation and treatment of ca. 6,000m3 of hydrocarbon contaminated soils using the E-clay technology together with the management of ca. 1,000 litres of contaminated groundwater (including free-phase product).

We were extremely pleased with the remedial works carried out by them and they provided a valuable service that enabled us to meet our stringent remedial targets together with stringent project deadlines. All contaminated soils were treated effectively and the entire volume was able to be safely re-used as part of the site redevelopment, which avoided prohibitive off-site disposal costs.

Envirotreat were also innovatively able to safely use some of the impacted groundwater as part of the
treatment process which saw significant project savings for our client.

Overall we were delighted with the professionalism of Envirotreat and the success of their E-clay
treatment process. We would highly recommend their service to others”