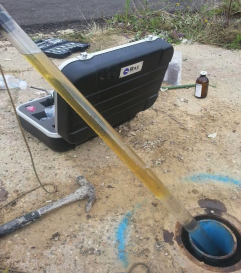 Historically the Sandon site was a petrol filling station. The site being relatively small, 0.1 hectares. The  petrol station was closed in 2006 and above ground structures demolished.

The developer had planning permission to develop the site for the construction of three residential units.

During 2003 there was a petrol overfilling incident which resulted in a significant release of petrol into the underlying soils and groundwater. This was subject to extensive site investigations by Arcadis.

The underground storage tanks were removed in 2006. A Remediation Implementation Plan was developed by Arcadis in 2007 to address the identified soil and groundwater contamination. The  Remediation Implementation Plan proposed the excavation of impacted soils in combination with the use of Vacuum Enhanced Recovery and addition of an Oxygen Release Agent to address the residual groundwater contamination.

Hydrocarbon impacted soils were removed in 2009 under the supervision of Arcadis.

In 2010 Arcadis concluded that a groundwater contamination plume (including free product) remained, migrating off the site in a northerly direction.

The proposed Vacuum Enhanced Recovery and addition of an Oxygen Release Agent to address the residual groundwater contamination was the envisaged to take 24 months. This approach did not fit with any development proposals for the site, due to funding.

In 2012 the developer invited Envirotreat to submit revised remediation proposals (prior to their purchasing of the site), to assess the commercial viability of the scheme. The developer required the confidence that the site could be effectively remediated and that planning conditions could be discharged prior to purchase.

The Envirotreat remediation strategy combined source and pathway treatment to provide an integrated treatment approach and essentially comprised of the following:

The first phase of the remediation works involved the ex-situ treatment of the contaminated soils utilising E-Clay Stabilisation.

An E-Clay permeable reactive barrier was installed along the majority of the northern site boundary to intercept and treat the natural flow of potentially contaminated groundwater migrating from the site. 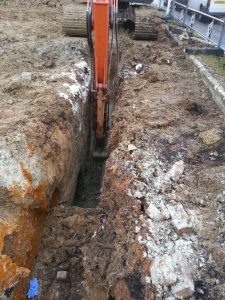 Representative samples of treated soils were leach tested and compared with the derived leachate target criteria for Total Petroleum
Hydrocarbons, BTEX and Polycyclic Aromatic Hydrocarbons. All leachate values were compliant with the agreed remediation target criteria