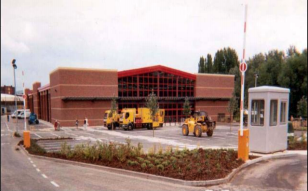 The site in Millgate, Stockport occupies an area of 4 acres and was formerly part of the Millgate Gas Works. The site is bounded by the River Goyt to the south and west, with the existing Millgate Gas Works site to the east, which is still functional today.

The site was deemed to be sensitive due to its close proximity to the River Goyt, which was the designated receptor for the identified on-site groundwater contamination, and its proximity to the town centre. The groundwater was found to be contaminated with both heavy metals and organic contaminants, including Benzene, Toluene, Ethylbenzene and Xylene (BTEX) and Polycyclic Aromatic Hydrocarbons (PAH’s). This type of contamination is typically found at gas works sites.

Giffords were responsible for evaluating remediation options. Envirotreat were recommended on the basis that the proposed Soil Mixed Reactive Barrier System (SMRBS) was able to treat all the contaminants identified within the groundwater including both the organic and inorganic / heavy metal elements. Envirotreat were also able to install and work within the narrow corridor of land available, in such close proximity to the river and river wall. Another consideration that had to be taken into account was the location of the site in relation to Stockport town centre.

The remediation strategy for the site was to install a SMRBS at the site with the intention to protect the adjacent River Goyt, whilst preventing recontamination risks to the groundwater from adjacent facilities.