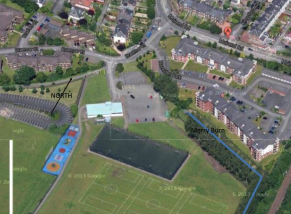 The Merry Burn bounds the eastern and part of the northern perimeter of the site.

The site is used as sports and recreation purposes. However, historically (1950’s) the site had been used for the disposal of waste (particularly chromium bearing wastes).

The Merry Burn along the eastern boundary of the site had been affected by the chromium (VI) leaching from the waste.

To elevate the ongoing contamination of the Merry Burn, extensive remediation works were carried out in 2003.

At the time, it was anticipated that while the remediation works would lead to a significant improvement in the quality of the surrounding surface waters – it was acknowledged that some ingress of chromium (VI) contaminated leachate would continue to occur which it was envisaged would diminish over time. In practice the chromium (VI) levels in the Merry Burn had not decreased as much as was anticipated and there continued to be some visible discolouration of the Burn.

Further site investigation indicated chromium (VI) waste breaking through into the burn in several location, further works were commissioned with the construction of gabion baskets and peat barriers at key locations to prevent the chromium waste entering the burn.

pH analysis of the result leachate was pH 11.8. This indicted that the waste was highly alkaline chromite ore processing waste. Analysis (by Envirotreat) undertaken of the leachate from the gabion baskets, indicated total chromium levels of 26,000μg/l of which 20,000μg/l was hexavalent (chromium VI). EQS for chromium (VI) being 3.4ug/l.

Following an options appraisal for the site, Envirotreat were approached in 2014 to provide a E-Clay Permeable Reactive Barrier remediation solution (utilising the recognised ChromeSorb Technology) to further reduce the ongoing contamination issues of the Merry Burn.
A section of ChromSorb PRB was installed in 2014.