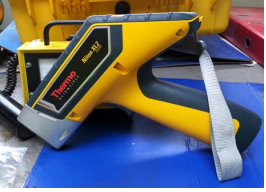 The site was located adjacent to the hospital complex at RAF Lakenheath. The storm water drainage system in this area was impacted with mercury contamination (resulting from historical spillages).

The client had previously commissioned a CCTV survey of the impacted storm water drainage system. This survey identified a major blockage in the main drainage run near the soakaway – additionally it showed that the drainage system was damaged in a number of locations and most significantly showed the presence of elemental mercury within at least one gulley pot and within the drainage run. The drainage system was flushed out as far as practically possible and recovered waste was removed from site for offsite disposal. The CCTV survey identified a breakage (hole) in the main drainage pipe close to the mercury contaminated gulley pot (G2). Storm water contaminated with mercury had clearly discharged through this hole into an adjacent inspection chamber – the mercury contamination had subsequently discharged through a hole around a redundant pipe into the basement boiler house (located directly below the inspection chamber) – this was clearly evident on the CCTV survey.

The original source of the mercury contamination was not identified with any certainty – the most probable explanation being the temporary outside storage of redundant control panels – mercury was discovered on the tarmac and in the adjacent drains following the removal of the panels. Envirotreat were commissioned by R&D Construction [R&D] to devise a remediation strategy to address the identified mercury contamination risks – R&D had been engaged by the client to replace damaged components of the storm drainage system (as part of a general civils package).