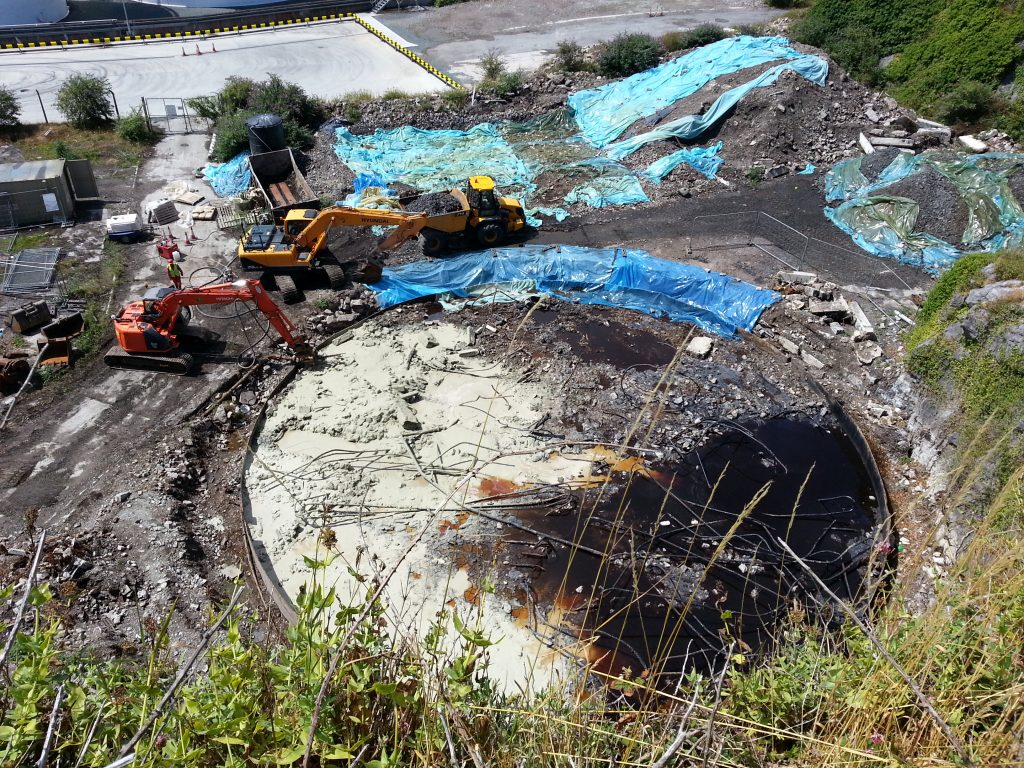 The Cattedown Fuel Terminal is situated in the Cattedown area of Plymouth. The site being adjacent to the northern bank of the River Plym estuary.
On acquiring the redundant bitumen storage facility , the client (Greenergy) was advised that a previous tenant of the site had demolished a large bitumen storage tank in the 1970’s and that the bottom section of the tank remained in-place and was effectively buried on site.
The tank base was determined to be approximately 26m in diameter of 26m and extending to 1.54m deep. Trial pits confirmed that the steel tank base had been left in-situ and that the void space within the tank base had been infilled with various spoil materials. The spoil materials were shown to be contaminated – the nature of the contamination was consistent with previous usage of the site for the production, storage and distribution of bitumen – the prime contaminants of concern were total petroleum hydrocarbons, polycyclic aromatic hydrocarbons and asbestos (fibres and ACM).
Envirotreat was commissioned to develop a remediation strategy to address the contaminated spoil materials within the tank base (and directly surrounding the tank base). The total remediation volume was estimated to be circa 1,000m³.

The remediation strategy proposed was E-Clay Stabilisation for the treatment of the tank contents and surrounding soils.

The E-Clay Stabilisation works were undertaken using a combination of ex-situ and in-situ treatment methodologies. The drier materials were excavated and treated ex-situ. The wetter materials in the base of the tank were treated in-situ as the materials could not be safely excavated.
Due to the presence of asbestos the works were undertaken in accordance with the Control of Asbestos
Regulations 2012, the works were considered to be notifiable.
The prime objectives were to identify the environmental and human health risks associated with the presence of asbestos (particularly the amosite fibres) and the necessary control measures to be implemented to safely complete the remediation works.

Representative samples were taken from the treated batches and combined to form composite samples for validation purposes. Samples were leach tested and compared with the designated leachate target criteria.
The tank base was capped with a concrete slab to address Human Health pathways.
A comprehensive Validation Report was produced on completion of the works.