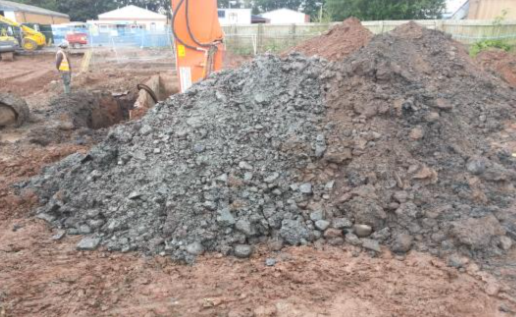 The site is located in Sherwood Road, Bromsgrove and was formerly occupied by a manufacturing facility, primarily producing automotive components between 1964 and 2002. The site comprises of a slightly elongated, irregularly shaped plot of land occupying approximately 1.7 hectares. The site is split into two distinct areas by the Spadesbourne Brook – the main body of the site (eastern side of the brook) was previously occupied by the former factory building and the remainder of the site (western side of the brook) was utilised as a parking area.

Site investigation works by GIP showed the south eastern area of the site to be significantly affected by historical contamination. The contamination is assumed to have arisen from spillages / leakages in the vicinity of the above ground fuel / lubricant storage tanks and filling pipework / valves located in this area and comprised of predominantly total petroleum hydrocarbon pollutants. A below ground swarf tank was also located in this area of the site – the tank was used to store swarf and associated cutting oils / lubricants.

The client had been granted planning consent for the redevelopment of the site for retail purposes (subject to the discharge of planning conditions) – commercial leases had previously been agreed with two national retailers, Homebase and Pets at Home. There were a number of planning conditions relating to land contamination – the pre-commencement conditions were addressed by the submission and approval by the regulatory bodies of an acceptable Remediation Strategy and Remediation Method Statement.

Planning Condition 21 stipulated that in the event that ‘contamination not previously identified’ is found on site then no further development would be permitted until written approval is obtained from the Council for an acceptable method of addressing the contamination. There was a significant risk that the project could be severely impacted as a consequence of this condition and henceforth Envirotreat designed and implemented a ‘Discovery Strategy’ to address such an eventuality. The strategy incorporated necessary protocols to be adopted and quarantine provisions to be implemented.