The vision is for Barking Riverside to provide a model for sustainable living in the 21st century. Over the next 20 years it is planned to build 10,800 new homes to house 26,000 people. The development will benefit from new transport links including the East London Transit and the Docklands Light Railway. New primary and secondary schools will also be constructed.

The specific development site described in this case study is the former Renwick Road Landfill. In addition remediation works were carried out on a contamination hot-spot.

The Renwick Road Landfill occupies an approximate area of 2.1km² . The site is bounded to the north by Choats Road which divides the portion of the landfill currently undergoing development from another slightly smaller portion of the landfill to the north. The eastern boundary is formed by a leachate ditch and the south flowing Gores Brook. The southern boundary is delineated by flood defences and the River Thames.

The landfill is understood to have operated as a local authority waste disposal site accepting domestic waste, asbestos waste, inert wastes, gasworks waste and contaminated soils between the 1950’s and 1993.

The landfilled wastes were a highly variable mix of domestic and commercial wastes including soils with strong hydrocarbon odours. An area of shallow suspected gas works wastes in the south-eastern corner of site recorded particularly high cyanide concentrations.

The base of the landfill was identified to be between 10m and 14mbgl – no membrane or engineered clay liner was identified suggesting the wastes lie directly on the natural alluvium.

The contamination ‘hot-spot’ was identified as gasworks waste and specifically spent oxide waste. This material is assumed to have been tipped historically and is currently present within a hollow surrounded.

CGL were commissioned to undertake a lead role in the investigation, design, material management for the whole redevelopment. Part of this remit involved a remediation strategy to address identified contamination risks associated with the former landfill.

The revised  CGL remediation strategy was fully approved by the Environment Agency and local authority. It comprised: 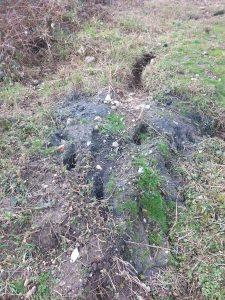 The barrier system comprised of permeable reactive sections on the eastern and southern boundaries (designed to intercept and treat contaminated groundwater migrating from the site in the direction of the Gores Brook and the River Thames) and a low permeability
section on the south-western boundary of the site designed to channel contaminated groundwater in the direction of the southern reactive barrier section. 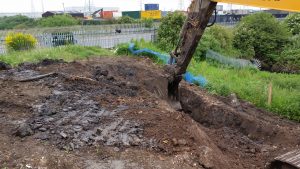 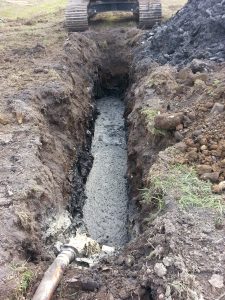 The gas works / spent oxide waste identified in the south-eastern corner of the landfill site  was delineated and excavated. The
stockpiled spent oxide waste was treated ex-situ utilising the designated stabilisation medium incorporating cementitious materials,
the appropriate E-Clay formulation and specialist additives, to address the concern that highly mobile and toxic free cyanides. Following successful validation (by leachate testing) the treated material was reused as part of the surcharging material requirement in accordance with the material management plan [MMP] for the site Developed by CGL). A further area of spent oxide was treated in-situ. 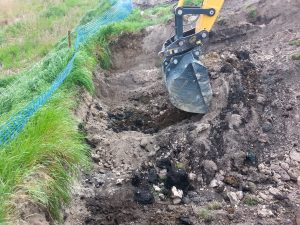 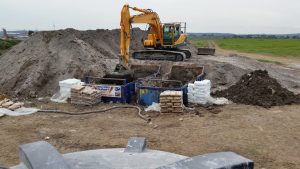 Three ‘hot-spot’ areas were identified as requiring remediation. It was decided to carry out in-situ remediation due to the significant
depth of the ‘hot-spots’. The ‘hot-spots’ were delineated by the excavation of a number of trial pits. The identified areas were treated in-situ utilising the designated stabilisation medium incorporating cementitious materials and the appropriate E-Clay formulation. 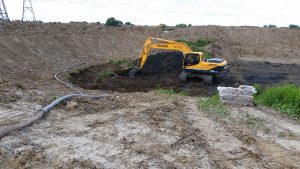