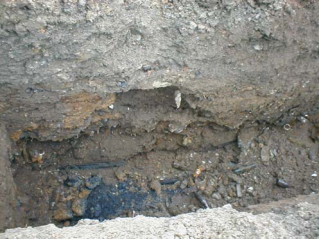 The 3 hectare site, in Chelmsford, Essex is a former gravel quarry. The contamination originated from infilling with a variety of wastes as well as use by TXU Energy for storage, workshops and vehicle maintenance.

Following remediation, the site was developed into a housing estate. The development comprised residential housing and flats, with associated gardens and landscaped areas.

The remediation strategy for the TXU site was designed to address the source and indirectly pathway contamination issues, with the intention of protecting both human and groundwater receptors.

Envirotreat employed an ex-situ soil mixing remediation strategy for the treatment of over 2750m³ of contaminated soils.

The works were conducted over a 3 week period under the auspices of Envirotreat’s Mobile Process Licence (MPL). Specialist technology, materials and supervision were supplied by Envirotreat, whilst Knight Environmental supplied all the required plant and labour for application of the Envirotreat ® Process.

The slurry production set up comprised 1 No. 1000L paddle mixer (where the E-clay® reagents were combined before being pumped across to the mixing zone) and 1 No. excavator fitted with a specialist processing bucket. The processing bucket has rotating blades at its base which facilitates a high degree of mixing. This bucket was required as the contaminated soils were clay based.