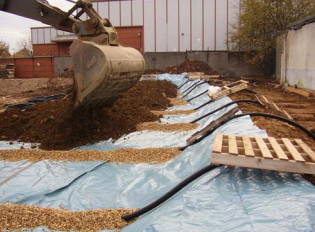 Historically, the site had been utilised as a commercial vehicle sales centre and repair garage. These activities featured fuel pumps with associated under and above ground storage tanks.

An historical  release of fuel from one of the above ground storage tanks was documented.

Envirotreat proposed a bioremediation to address the identified contaminants of concern.

The overall remediation strategy was designed to address the source and indirectly the pathway contamination issues in order to protect the identified groundwater and human health receptors. The remedial operation involved the ex-situ bioremediation treatment of the identified contaminants of concern to the agreed Site Specific Target Levels. The Site Specific Target Levels were derived based on a site specific risk assessment approach.

Circa 1,500m3 of contaminated soils were excavated and screened. An microbial bioremediation was used, a bioplie was constructed with resultant screened material, key parameters were monitored during the treatment process and appropriate actions taken to maximise the process.

The treated material underwent composite sampling for each 250m3 of material treated. Final contaminant concentrations being reduced to below the Site Specific Target Levels.