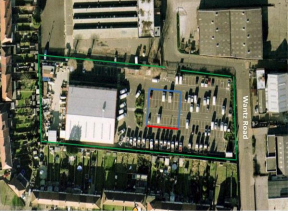 The London Borough of Barking & Dagenham

This site had formerly been used as a button mould works and associated plating shop, more recently under the ownership of the district council. Following remediation the council developed the site into a highways depot.

Historically organic solvents were employed on the site to clean the materials used for the production of buttons prior to plating etc. Following comprehensive site investigation work an extensive ground water plume of organic contamination was identified spreading in a south-easterly direction across the site (associated with groundwater flow). The source of the contamination coincided to the location of the original main works.

The general principle of the overall remediation works was to address contamination issues associated with the spread of the plume and to protect other identified groundwater receptors. The contaminants identified in concentrations of concern on-site were primarily Trichloroethylene (TCE), Cis 1-2 dichloroethene (DCE) and tetrachloroethylene (PCE). Heavy metal contamination included elevated levels of cadmium and chromium.

The organics identified were DNAPL’s hence, the contamination of concern on-site were likely to be found perched on the clay layer, nominally 8m bgl. Envirotreat proposed a barrier scheme to prevent the further migration of contaminated groundwater and free phase product from the containment zone.

The consultants preferred the Envirotreat strategy on the basis of cost (estimated as being 4-5 times more cost effective than alternative options), risk (there was no need to excavate or expose any contaminated material from the site) and ease (the barrier system could be implemented relatively easily in comparison to alternative proposals).

The strategy involved the forming a box barrier around the contamination plume, whereby three sides consisted of a low permeability wall (approx. 116m in length) and a permeable reactive section (approx. 36m in length). Several gates were left in the low permeability wall to allow groundwater to minimise the effects of the barrier system on the overall groundwater regime.