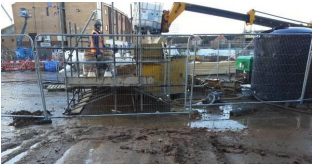 The site is located within the grounds of Warwickshire Cricket Club in Edgbaston, Birmingham and occupies 0.45 hectares. The site is bounded to the north by residential properties, to the south by buildings / stands and to the west by a grassed area of land belonging to WCC. The eastern side of the site is bounded by the River Rae, which is 2-3m below the level of the site.

The site has planning permission for the development of residential properties – this is the first phase of the overall development which will comprise of 79 three and four bedroom houses.

GIP had previously carried out site investigations which confirmed the presence of elevated hydrocarbon and metal concentrations in both soil and groundwater in excss of generic screening criteria.

GIP determined that metallic pollutants (particularly lead and arsenic), total petroleum hydrocarbons [TPH], trimethylbenzene and polycyclic aromatic hydrocarbons [PAHs] were present in shallow made ground at concentrations that potentially posed a risk to human health. In the eastern part of the site a TPH concentration of 16,200 mg/kg was noted (in close proximity to the River Rea).