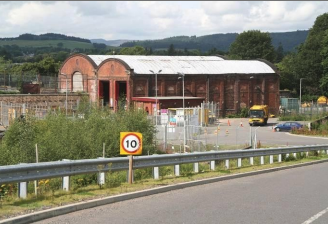 Ground investigations showed the site to be overlain by Made Ground with a variable thickness of between 0.2 – 6.5m bgl. The Made Ground is typically underlain by Alluvium Deposits extending to depths of over 11m bgl. The Alluvium Deposits comprise of medium dense to dense silty sandy gravel with some cobbles. In addition to the above, geological maps indicate the above to be underlain by Llandovery Formations (Gala), comprising medium to thick bedded and coarse-grained sandstones with thin siltstones.

At the time of the investigation, groundwater was encountered between 0.6 – 8.0m bgl. The direction of groundwater flow was in an easterly direction and most likely impacting the River Tweed to the south east. The Site Investigation identified potential receptors as the River Tweed, localised groundwater, site users and neighbouring residents. The Waste Transfer Site was part of a former Gas Works and was contaminated with pollutants typical of such industrial activity.

The prime concerns were the protection of offsite groundwater receptors and particularly the River Tweed. An Envirotreat Soil Mixed Reactive Permeable Barrier was considered the best technology solution for this application, as it would address all contaminants of concern within the groundwater to the proposed clean up criteria, within the budgets available.

The objective of the proposed Envirotreat Soil Mixed Barrier System was to protect the surrounding environment from potential offsite migration of contaminated groundwater originating from historical use of the site as a gas works.