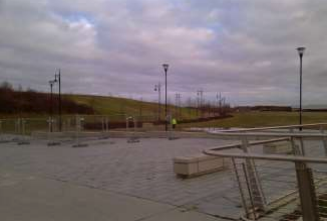 In September 2005, a significant oil / fuel spillage occurred at the location.

Envirotreat were commissioned to design a permeable reactive barrier to address the identified dissolved phase contamination arising from the 2005 spillage and to provide the technology / proprietary materials for the barrier installation. Halcrow were engaged as project consultant by the Homes & Communities Agency.

The prime contaminants of concern were identified as total petroleum hydrocarbons (including BTEX) and naphthalene.

Envirotreat proposed and demonstrated that groundwater contamination could be addressed through the installation of a permeable reactive barrier. The barrier was designed and demonstrated as being effective by comprehensive laboratory trialling and modelling techniques. The objective of the barrier was to mitigate the risk of ongoing migration of contaminated groundwater to the identified downstream receptors by severing the pollution linkage pathway.