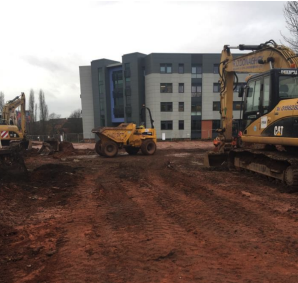 The site was historically part of a residential development which remained until around 1937 to 1951 when the area was cleared most probably due to the outcome of war hostilities. By 1962 the northern area of the site was used as a park / garden area. Residential tower blocks were constructed during the late 1960s and 1970s. Later maps (2001 – 2006) show that the residential tower blocks have been removed, since then the site had been used as a contractor’s storage compound.

Thomas Vale were commissioned by Sidney Stringer Multi Academy Trust to develop the site for additional educational purposes to complement the existing establishment within the local area.

The proposed development required a significant “cut” element with up to 6,000 tonnes of soil destined for offsite disposal.

Envirotreat was engaged by Thomas Vale Construction to prepare a Remediation Strategy and Method Statement document for submission to the Local council in accordcnae with the prevailing planning conditions. This document comprised a “watching brief” for the duration of the enabling works element of the development. A key requisite of the “watching brief” was to rapidly assess the suitability of excavated soils for off site disposal and / or re- use on site.

The strategy and method statement were subsequently agreed by the local council prior to the commencement of the works.

Working closely with the groundworks contractor on site, Envirotreat monitored all

excavation works for visual evidence of contamination (in particular asbestos).

Throughout the excavation process, Envirotreat follwoed the agreed Discovery Strategy and Quarantine Process Protocos to effectively manage the potential risk of unexpected contamination on the site.

Using visaul, olfactory and headspace analysis (via hand-held PID), Envirotreat assessed the excavated soils against the remediation criteria set out in the Remediation Strategy and Method Statement and promptly advised the client of suitabiliy for reuse or anticipated off-site disposal route.

Following excavation, Envirotreat, undertook comprehensive validation sampling and testing of the excavations in accordance with the agreed Remediation Strategy and Method Statement.